Newsletter #154 Nobody Cares About Your Logo

"I don't love it, but it will grow on me." said Phil Knight when he chose what would become the Nike swoosh.

Carolyn Davidson who was student at Portland State University had originally met Phil Knight in the late 1960s when he was an associate professor. He had overheard her say she couldn't afford to take an oil painting class. At the time Knight was also co-founder of Blue Ribbon Sports who were distributors for Tiger Shoes and he wanted Davidson to produce some charts and graphs in preparation for a meeting. After further work she was asked to design a logo for the fledging new company in 1971 and produced several options, one them the swoosh. Davidson was paid $35 originally for the design but in 1983 was rewarded with several hundred Nike shares and a gold swoosh-shaped diamond ring.

The swoosh is now one of the most recognisable logos in modern history, but what part did it play in Nike's success? The fact that Nike signed a skinny basketballer from North Carolina named Michael Jordan in 1985 helped. The company's use of celebrity superstar athletes since then such as Roger Federer, Rafael Nadal and Tiger Woods is far more relevant. Also the fact that Nike is the only company that has won the Cannes Advertising Festival Advertiser of the Year more than once shows that their marketing is also pretty good.

Because the truth is, how you use your logo is important, but what it looks like and what it means is only important to you and your designer. Did you

know or care that the Amazon logo means that they sell everything from A to Z? That the four rings in the Audi logo refer to the original four companies from the Auto-Union Consortium in 1932? Or that the Sun Microsystems logo reads 'Sun" no matter which way up its read? The Apple logo is beautiful, but although its designer Rob Janoff was aware of the byte/bite pun he designed it like that to “prevent the apple from looking like a cherry tomato.”

In a similar way to the swoosh, the Apple logo is outstanding but is only memorable because of Apple's incredible success over the last decade. Can anyone remember the NeXT logo created by Paul Rand for Steve Jobs for the outrageous price of $100,000 in 1986? Of course not, the company was bought out by Apple in 1996 and the logo is only remembered because of its price and the fact that Steve Jobs was involved.

In Website design showing an oversized logo of your company will push more important content down the page, so that many visitors won't see it because it is 'below the fold'. Super-sizing your logo is a sign of corporate insecurity and can make the overall design look disjointed and discordant. Interesting and fresh content is far more important and attractive to potential customers than your logo or company name. You've only got a few seconds to pique a browser's interest; a pretty graphic doesn't do it.

Do you really think they will notice that particular shade of green you spent so much time selecting, or that they will spend minutes mulling over the message your designer is trying to invoke?

Design it, use it appropriately and move on to more important things like making your customer service stellar and ensuring that your product line rocks.

Seriously, nobody cares about your logo.

"Do unto others 20% better than you would expect them to do unto you, to correct for subjective error." Linus Pauling 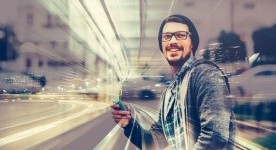